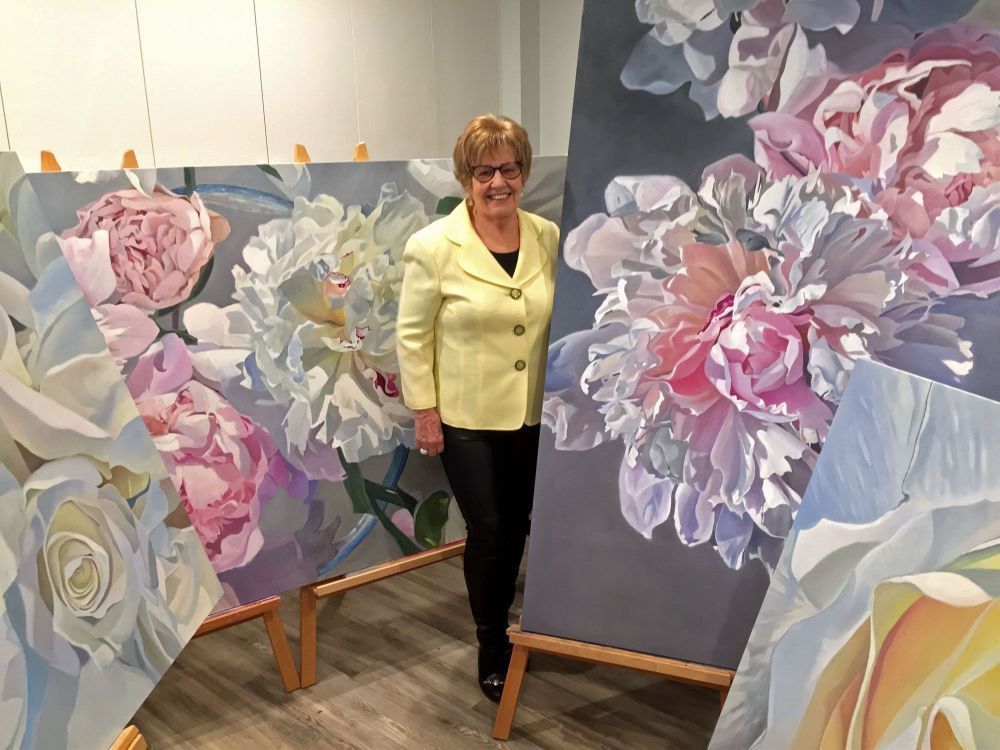 ﻿BIOGRAPHY﻿
Gerry Thompson was born in and grew up in Vancouver, British Columbia, Canada. She spent several years in Alberta, Canada, where she taught music at a college and where she also earned her Associate Degree from the Royal Conservatory of Music as a Solo Performer in piano. There she began her teaching career. It was also during that period that she first picked up a paint brush. Since that time her passion for painting has never diminished.

In 1974 Gerry moved to Abbotsford, British Columbia. She continued to teach piano and music theory, also training student teachers in her studio, Thompson Studios.  During those years she played violin in the Fraser Valley Symphony Orchestra.

She enrolled in the Fine Arts program at the Fraser Valley College, now called the University of the Fraser Valley. After graduating from the program, majoring in Painting and Printmaking, Gerry began to teach watercolor in the Continuing Education Department of the College for seven years, until she moved back to Vancouver.

Gerry is an award-winning artist, and her paintings are found in corporate and private collections throughout the world. Recent awards and accomplishments are her receiving the Federation of Canadian Artists Bronze Medal at the 2012 Spilsbury Medal Exhibition, the Canadian Society of Painters in Water Colour’s prestigious Doris McCarthy award, and a Northwest Watercolor Society’s Waterworks award.  She is a Signature Member of these societies. In 2012 her painting, French Vanilla, was accepted in the American Watercolor Society’s annual exhibition in New York City. In 2015 her watercolour, The Gathering #2 was accepted, and in 2016 The Gathering #4 was included in their international exhibition. In 2016 she became a Signature member of this society. Her watercolour, Perpetual Fragrance, was a finalist in the International Artist Magazine. In 2014, and The Gathering #2 received 3rd Prize award in the June/July 2014 edition of the magazine. A feature article about Gerry and her artwork was published in the July 2014 issue of American Art Collector magazine. The Gathering #3 received the GRAND PRIZE in the January/February edition of the International Artist Magazine as well as being accepted in the 150th Anniversary International Exhibition of the American Watercolor Society. Her floral oil painting, Allure received the GRAND PRIZE in the June/July 2020 edition of the International Artist Magazine.

In June, 2014, she travelled to Fabriano, Italy, where The Gathering #2 was one of 12 Canadian paintings invited to be displayed at the international exhibition, Fabriano in Watercolour 2014.  In 2015 her watercolour, Lady In Waiting, was displayed in Fabriano, and in 2017 Stonewalled and in 2018 Gated Community #3 were also included in the Fabriano exhibitions.

As a popular workshop instructor and juror she has travelled to locations in Canada, United States

ARTIST STATEMENT
Painting and music are my lifelong loves. Music was an integral part of my daily living while growing up in Vancouver, British Columbia with my eight siblings. My performing on the piano began at an early age. Later I gradually added violin, accordion, organ, and synthesizer.

After my son was born I picked up a paintbrush, and to this day my passion for painting and drawing has never diminished. My own three children grew up in a home that was filled with music and visual art. This has positively influenced their individual specific career choices and interests.

Teaching is also one of my loves. To see a budding artist or musician grow and excel gives me great joy. I do not believe in the philosophy of “I don’t have any talent”. If a person has the desire, the tenacity, a positive open mind, and a good work ethic, one can become accomplished in his or her chosen field of interest. I believe that we do our best creating in a positive and relaxed atmosphere. My best advice to myself and to my students: “Paint the easy stuff first. The rest usually takes care of itself. Paint what you see, not what you think you see”. It is the reason why I continually rotate the paper or canvas while the painting is in progress.

I paint in several mediums – oil, acrylic, watercolour, and mixed media. Subjects that inspire me usually have one or more of the following attributes: strong contrast between light and shadow, combinations of natural and artificial light, unique textures, close-up perspective, interesting color combinations. Although my finished works are realistic in style, my method of creating is to paint abstract shapes.